Toucan Stove(AKA penny stove)
I`ve mentioned these stoves in previous blogs, simple, homemade and very lightweight and there are plenty of videos online on how to make these but this is the way I make mine. I only use two tools, a craft knife as it makes a cleaner cut and a multi tool, drills can also be used but are more or less optional and I tend not to use them. 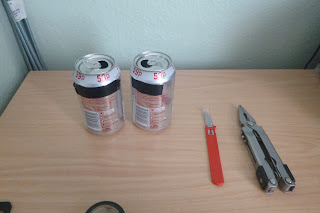 the only other things required are 2 fizzy drink cans, hence the name. the first step is to rest the knife on something in this case I have used a notebook but it doesn't really matter what you use, you then turn the bottom of the can against the blade of the knife without using much force to score and eventually cut through the metal, even when a cut eventually appears in the metal don't force the cut as it will buckle the metal. 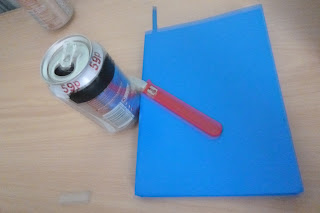 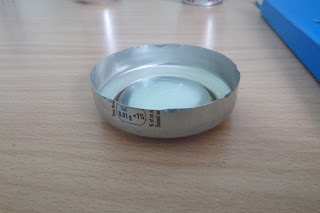 before the bottom of the second can is cut off its a good idea to cut the required holes into the can as it becomes more difficult afterwards. there is one main hole to fill the stove up with methylated spirits and 16 holes around the edge of the can, I`ve found the best thing to is to put these holes on the shoulder of the can as this is where the metal is slightly thicker and is just about the right place to get the most heat from the flame without restricting the oxygen, I`ve also found through experimentation that having 2 rows of 8 holes at slightly different heights works better, I`m sure there is a scientific reason as to why this is but I have no idea, word of caution metal burrs will probably be created during this process, so be careful afterwards or use the file on the multi tool to smooth the burrs down. 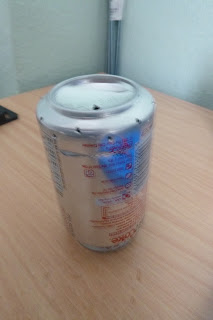 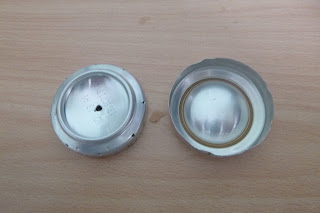 after both cans have been prepared, the bottom half of the stove must be crimped slightly with the pliers from the multi tool so that it fits within the top half, this is possibly the hardest part of this build to get right and takes a little skill to perfect, too much will result in gaps and too little will result in one half of the stove splitting. 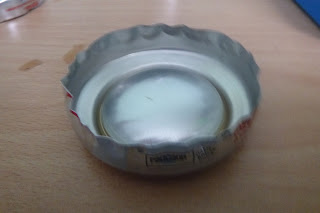 once this is done a decision has to be made about whether to use a wick or not on the inside, again through experimentation I`ve found the best wick to be glass wool/fibre although this can obviously be expensive if only making the one stove, the wick I used in this stove was an old cotton tea towel, again an experiment so i don't know how it will turn out.﻿ 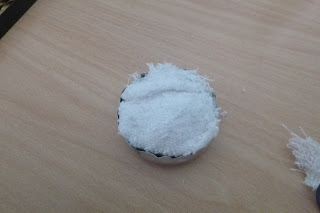 regardless of whether you use a wick or not the two halves of the stove now need to be pushed gently together. 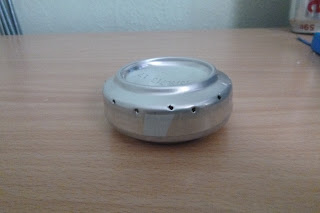 the only thing required to finish this stove is to place a coin over the centre hole to seal it when the stove has been filled with meths, hence the more common name for this stove. there are however a couple of things that can be done to refine this stove a little further.
As this stove has to be primed before it can be used properly it makes sense to have a priming pan and for this I use the lid of a tin can which has been taken off using a side cutting tin opener which leaves a rim around the edge to hold a very small amount of meths in. 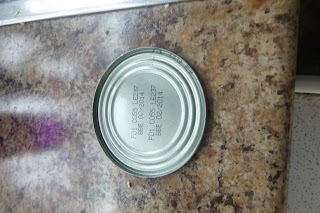 something else I have found through experimentation is that these stoves don't really work properly until they have been used a couple of times so I always burn a full fill of meths at least twice before I start using these in the field. 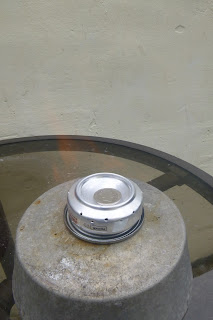 ﻿
﻿
﻿
﻿
depending on how deep you make these stoves will depend on how long they last, the stove I have made here should last approximately 35 minutes on one fill.
As with most things there are alternatives using the same design, one of the main design differences is, rather than having the flame holes on the outside they can be placed on the inside of the supporting ring, this creates a more intense and hotter flame but does have the disadvantage of requiring a separate pot stand.

a further development uses just one can and ends up looking very similar to a Trangia burner, this however requires more tools, measuring and cutting and I found it didn't work anywhere near as effectively, this doesn`t mean you shouldn`t give it go however, it may work better for you than me. another development of these types of stoves use metal beer bottles but as these are relatively rare in the UK it can be an expensive option and I have only managed to create one of these stoves which works well but I don't use it very often as it would be nearly impossible to replace if anything happened to it and as I always say with equipment personal preference is key to your decisions﻿
﻿
Follow the link below to go to the Lone Wolf Mobile Bushcraft website.
www.lwbcfs.com
﻿
﻿
﻿
Posted by Lone Wolf at 10:32