Once again I`ll start with a disclaimer, I`m not sponsored to do these blogs nor am I going to go into great detail about each model on the market as I have to use my own money to buy this equipment, so I have bought three models that represent the main types of hiking stoves on the market and rather than going through boil times, weight, accessories, burn times and so on I will be focusing on what I usually do which is pros and cons of each type to give you an overall assessment of what you can expect from each to help you make a choice should you wish to buy one.
Gas stoves are normally the next step on from Trangia stoves and sit quite comfortably in between Trangia`s and petrol stoves, on the one hand they are clean, quick to set up, get going and boiling water, on the other they require more maintenance than a Trangia, although far far less than a petrol stove, gas cylinders can be hard to get hold off but they`re biggest drawback is at high altitude or low temperatures gas becomes inefficient and can in extreme cases freeze altogether. 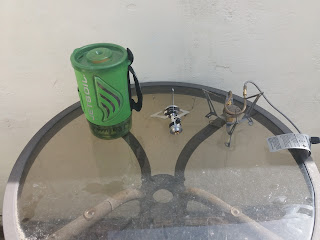 The three types of stove I have chosen are the Primus Express spider, the Coleman Fyrelite and the Jetboil flash, the first thing to note about both the Express spider and the Fyrelite is that neither of them come with a Pietzo igniter which is not unusual, you can buy versions of these stoves with the igniter but beware they will cost more and they can be damaged so even if you do get a stove with a pietzo igniter always carry an alternative means of lighting your stove.

I`ll begin with the jetboil, these stoves have as many people who love them as hate them, personally I can see and sympathize with both sides, its compact nature and stupidly fast boil time (usually around 90 secs for 1/2 litre of water) means quick brew times and not much room taken up in your pack and if put away correctly and with the smaller gas cylinder everything can be packed inside the pot itself. 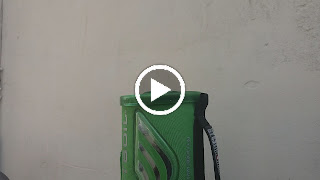 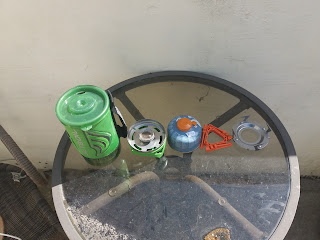 First is the gas cylinder, then the burner, the pot support and finally the adapter ring so you can use normal pots with the jetboil burner, using this with normal pots however means you will lose that incredible efficiency, on the other hand however without buying the after market accessories you are rather limited to what you can do with this stove, it biggest detractors will say you can only boil water and cook boil in the bag meals, which maybe true but I bet someone will have found a way to cook more than that in these stoves.
As I stated these stoves are now coming with an adapter for normal pots to be used, 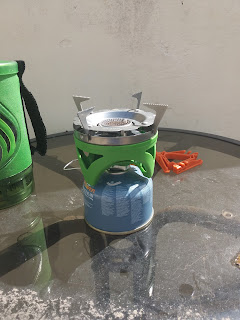 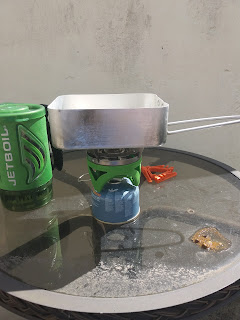 but this isn`t the focus for this blog as the Coleman fyrelite will be covering that particular role.
So what makes the pot of the Jetboil so special? firstly it actually locks into place on the burner so the whole thing from cylinder to pot are one unit and combined with the pot stand (which I didn`t use as the other stoves do not come with one ) make this quite a safe unit, secondly is "heat exchanger" (their words) which stops an incredible amount of heat from escaping from the sides into the atmosphere and with the heat directed where its needed makes for the fast boil time. 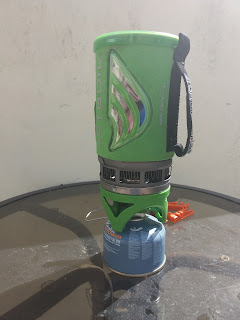 So apart from the downsides mentioned above what other downsides are there with this stove? well firstly let me say that i don`t like "stack on top" stoves this is where you get the pot sat on top of the burner sat on top of the cylinder, because of the height that be gain, uneven ground can become a problem, any slight angle and you pot could fall off and you stove fall over causing an inevitable fire and the higher the stack the more likely this is, for this blog I got two cylinders, the standard jet boil cylinder and the bigger Coleman 500 cylinder, both cylinders fit the pot stand increasing its stability making this an even safer unit to use but it still stacks high. 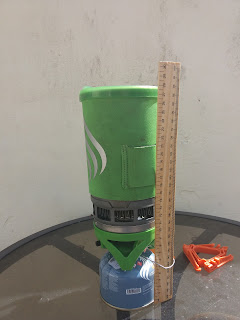 about 28cm high with the standard cylinder 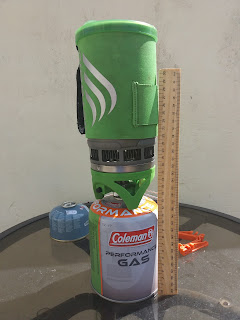 With everything locking together however the safety aspect of this stove is good, you can practically, ALTHOUGH NOT RECOMMENDED OR SUGGESTED, tip this stove over completley and not have anything catch fire, once again I DO NOT SUGGEST YOU TRY THAT AT HOME... 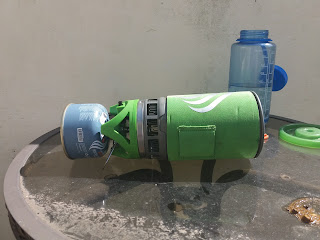 All locked together as one unit, please note it was not lit at the time i took the photo

The jetboil is so efficient at directing its heat that it can almost be held while the stove is lit, once again PLEASE DO NOT TRY THIS AT HOME!! with the flame turned all the way to maximum I could practically hold the stove while it was burning. 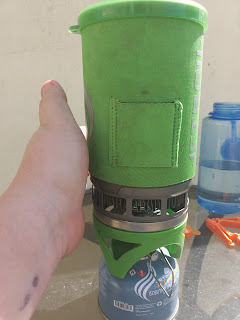 stove lit, I could get my hand that close before I could feel heat

Jetboils are expensive but they do have alot of pros if you are willing to put up with some cons, there are now a number of accessories on the market to make these more flexible but for the stove as it stands providing you remember the limitations they can quite quickly become one of your favourite stoves.

The Coleman fyrelite is the lightest stove in this line up weighing in at just 77 grams it is also the smallest and the easiest to set up, no pipes no interlocking, just screw on top of the cylinder turn the tap and light. 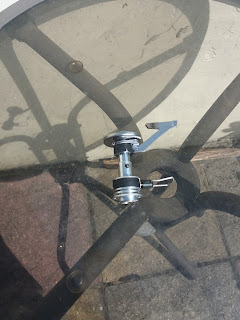 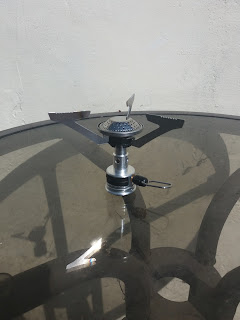 As I stated above I don`t like stack on top stoves and this is one of those types of stoves, I do understand the appeal of them though, small and lightweight, whether they are more efficient because they have no additional pipework however is a matter for debate, average boiling time for a stove of this type is about 3 minutes but alot of heat is lost around the sides, in terms of the height of these stoves will of course depend on the cartridge you use. on the jetboil cartridge there is an overall height of 13.5 cm and for the 500 cartridge a height of 21 cm. 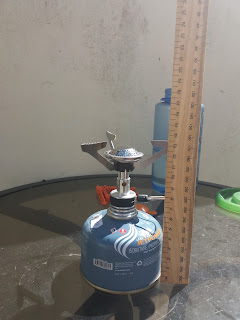 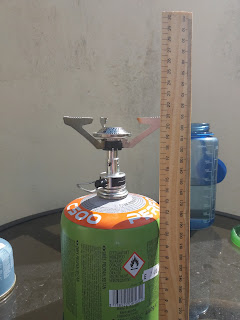 The primary reason I don`t like stack on top is because of the relative lack of stability when it comes to pots, for this blog I am using standard army mess tins made from aluminium, even a small amount of tilt or lean can result in your pots falling off the stove and/or the whole thing falling over, as I said you can use the pot stabilizers from the jetboil but I am not using them in this test, 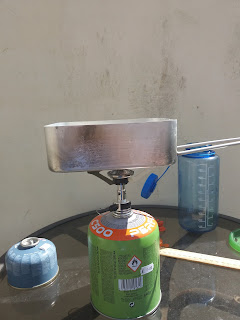 Using the 500 cartridge this is the amount the stove has to lean before the mess tin falls off. 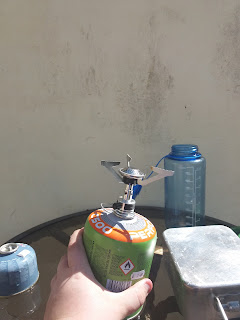 With the smaller cartridge this lean is slightly increased before the tins fall off which is perhaps no surprise. 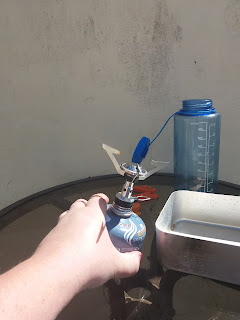 The other reason I don`t particularly like these stoves is the placement of the control, more or less directly underneath the flame, now in fairness there isn`t many other places to put these controls but there is an increased risk of burning yourself. 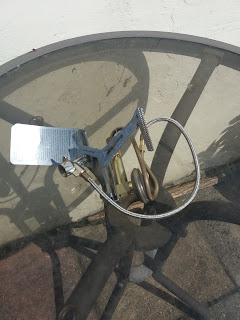 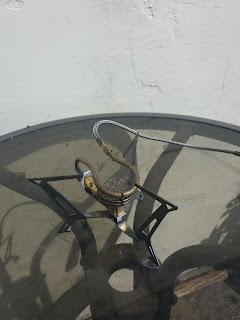 The Primus Express spider is the last type of stove and I have heard this type of stove referred to as a "lander" type stove, presumably because they remind people of a moon lander, these types of stoves can usually take bigger pots and are not affected by the height or size of the gas cartridge. 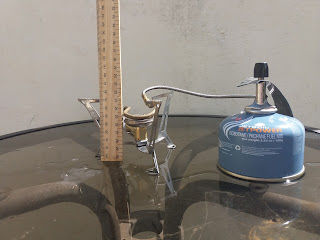 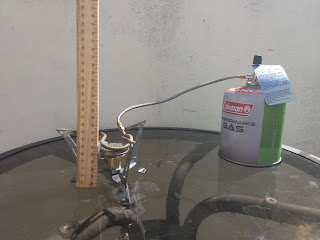 I do prefer these stoves for there stability and the fact that the controls are away from the flame, in this case on top of the stove itself, on the downside the pipework does add bulk and as with the Fyrelite a lot of the heat escapes from the sides, average boil times for these types of stoves is about 4 minutes, in terms of the stability the angle is much greater before the mess tin fell off . 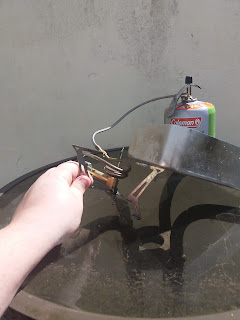 on a side note, the Primus Express spider can be adapted to run off lighter liquid fuel, petrol and naphtha primarily.
as I say this blog is more of an over view of the main different types of gas stoves on the market, the choice you make is ultimately up to you.