This week I went hunting for giraffes...no not like that, as if I`d want to shoot one, besides I don`t think an air rifle would make much of an impact! even with magnum pellets. In this case the giraffes in question were statues celebrating 50 years of Colchester Zoo. In total there are 112 giraffes scattered around Essex and Suffolk, 30 of these are part of an art trail and have been professionally painted the rest have been painted by schools, finding the 30 on the art trail also entitles you to enter a competition where the prize is a 17 day trip to Tanzania and Kenya, this was the main reason that I ended up running around all over the place this week, progress is tracked by using an app and scanning QR codes on the giraffes themselves with smartphones, the app has been active since the 2nd of June. I did download the app on the first day and started scanning the giraffes in Colchester town centre,  unfortunately due to fatal error in the program the app kept crashing and losing all the data I had collected, also due to poor administration most of the giraffes were in the wrong places, the QR codes wouldn`t work properly and the staff in most of the shops didn't know anything about what was happening, this week however an update became correcting the technical side of these problems, so the hunt was on! with just one day to spare could I collect them all? the trip would involve going to Clacton, Ipswich, North Colchester, Colchester Campus, Colchester Town centre, Stanway, Eight Ash Green, the zoo, Maldon, Basildon, Romford, Chelmsford and Braintree Freeport Outlet Village, a tall order (no pun intended) but possible.
8.30 rolled round and I set out for Clacton...and got stuck behind a truck, `not a problem` I thought, `he`ll be turning off at the dual carriageway`...no, he didn`t he stayed in front of me for about 5 miles, doing between 30 and 40 miles an hour, the legal speed limit for a truck but still frustrating as hell, finally he turned on to another road and I could get my foot down...until I went round the corner and got stuck behind yet another truck, argh! I ended up following this truck all the way to Clacton where the first set of giraffes would be and were, the problem was it was 9.30 and the shops didn`t open until 10.00, I should have gone to Ipswich first, however the first shop had helpfully put the QR code in the window so I could scan it through the glass, if the other shops had done this I could have been done in about 10 minutes but no, apart from the main art trail giraffe the other QR codes were within the shops themselves, meaning I had to wait around until 10 to get them, when all the QR codes had been scanned I was finally away to Ipswich... 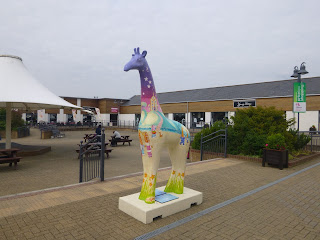 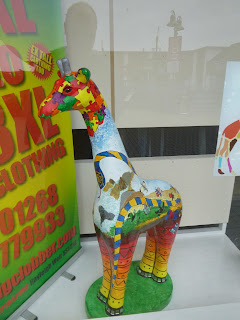 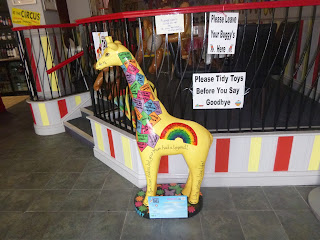 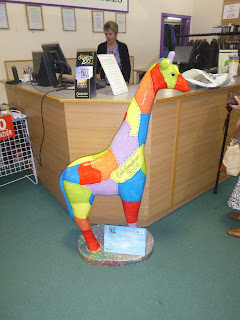 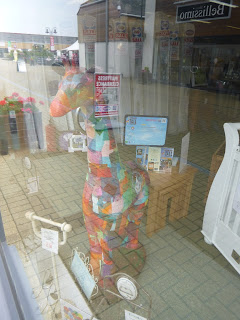 
or so I thought, normally I have a lot of patience for learner drivers, it can be very daunting when you first get on the road and this was a very nervous driver, at least judging by the kangarooing and weaving, but not when I`m trying to get somewhere in a hurry, when they finally got out of the way (by pulling a very dangerous manoeuvre across the road into a layby on the other side) I managed to make some decent progress at least until I got into Suffolk itself, where I got stuck behind an elderly driver (I swear there was a conspiracy) how do I know it was an elderly driver? they are the only people I know that insist the national speed limit is 45 miles per hour! thankfully I wasn't behind them that long and managed to get to John Lewis in Ipswich without much more bother, where I encountered the first of the staffing issues for the day, when I enquired as to the whereabouts of the giraffes in the store, the shopkeeper started looking on the computer system and told me that they had various models for sales, when I explained about the artwork statues I just received a blank look, it took a few minutes and several questions before I found out that the giraffes were upstairs in the café, all three were side by side, in seconds I had got them all and was gone into Ipswich town, 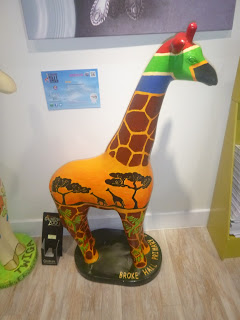 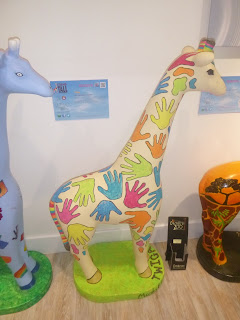 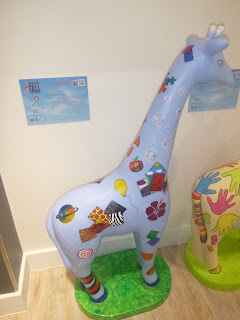 ﻿
where the next art trail statue was located, this was found easily, scanned and photographed as was the poor example of a TARDIS next to it. 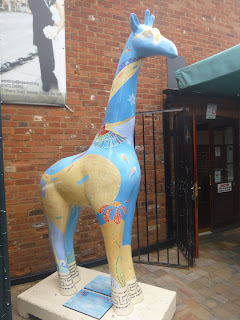 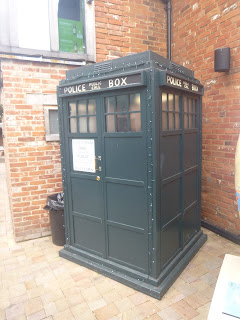 the next art trail example was located in the north of Colchester and was easy to get to as it was a run straight down the A12 to the Mini dealership, as a bonus 2 of the schools statues were located inside the door 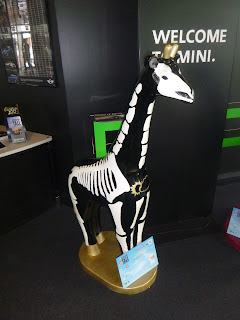 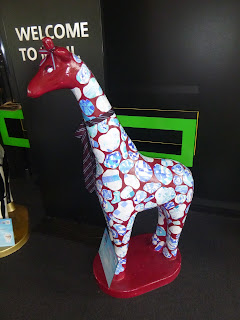 the giraffe at the main railway station was collected as was the one in McDonalds, the giraffe at the campus grounds proved to be slightly more tricky as there was nowhere easy to park and involved a ten minute walk to it. 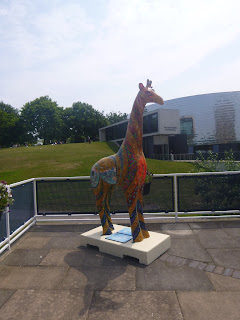 with all these collected as well as the giraffes in the Hythe, I headed into Colchester town to collect the majority of the giraffes, I knew this would take the best part of an hour and a half, with so many to collect I carefully planned my route to waste the smallest amount of time, the route needed to take in the Art Museum, Castle Park, the High Street, the Theatre, a couple of outlying areas and Lion Walk. 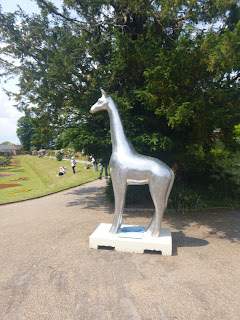 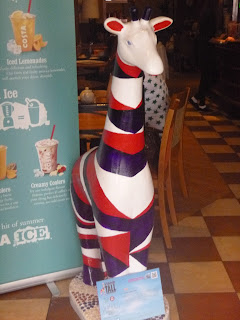 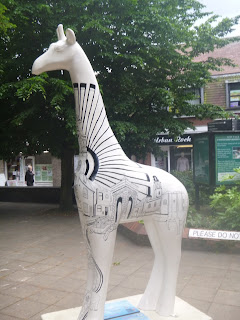 Stanway was my next port of call where another 9 statues were located, followed by the giraffes at Eight Ash Green, the zoo was next on the list, this is where the biggest sticking point of the day came, I`d expected the zoo to be slightly sneaky and put their giraffe within the zoo grounds forcing people to go in to get it, however along with the big prize there were several other mini prizes, one of these being 1 free entry to the zoo which I had planned to use to get the giraffe on the grounds, there were conditions in the REALLY small print though and the free entry was only for a child with one full paying adult and I wasn`t prepared to pay £20 to walk a few metres into the grounds.
having left the zoo empty handed and with time running out I had a decision to make, I could go for the last 3 art trail giraffes or the ones in Romford and Basildon, I decided to go for the art trail giraffes that was the main goal of the day afterall, this meant I only needed to get to Maldon, Chelmsford and Braintree, the other advantage of this was getting the school giraffes at Braintree outlet village, making up the numbers, although Maldon was collected quickly, Chelmsford wasn`t so easy, not only had the giraffe been removed but a fence had been put around its stand making the QR code difficult to reach, I got some pretty odd looks leaning over trying to scan the code, I did manage to get it though and headed to Braintree, it was 5.30 when I reached the outlet village and had half an hour to collect the last of the giraffes, this is where I encountered yet more staffing issues, the app had one of the school giraffes in a certain shop this turned out to be wrong however and they had moved it out of the shop to another one and when I asked a member of staff about giraffes I was taken to the stuffed toy section and shown a selection of giraffes for sale, once again when I explained further it resulted in yet more blank stares until all was clarified by another member of staff, how the hell this person had missed the 8 foot giraffe in the middle of the village as well as all the others dotted around the site is beyond me, 29 out of the art trail giraffes had now been collected and I concentrated on getting the rest of the school giraffes in the village, with all of the giraffes I could get now collected I headed for home determined to go to zoo later for the last of the art trail giraffes.

you`re probably now wondering if I went back for the last giraffe at the zoo....course I did! and he wasn`t exactly hard to miss either (he was actually used in Monaco to promote an event out there until he was bought for the zoo) so I`m now entered into the competition and really hoping to win 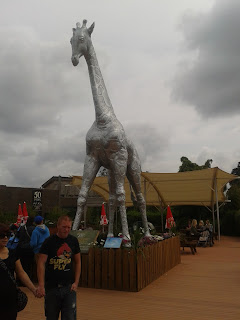 Follow the link below to go to the Lone Wolf Mobile Bushcraft website.
www.lwbcfs.com
﻿
Posted by Lone Wolf at 10:36