Essex Way part 2
In one of my previous blogs I walked part of the Essex Way from Harwich to Manningtree, this week I decided to do a little bit more, this time from Mistley to West Bergholt, a distance along the way of just over 27 KM, which given the not overly excessive speed I walk at would take me a little over five and a half hours to complete, six with a break. I would once again be using the "runchecker" app to keep track of my progress, which having learned from previous experience I`d reprogrammed to give me information about my progress every 45 minutes rather than every 5 and to give info in metric rather than imperial (UK Ordnance Survey maps use kilometre grid squares) as well pausing when I stopped, this feature ended up becoming a little annoying as it would register a pause every time I went through a gate. none of this however stopped the condescending tone, at least in my mind, the app uses whenever your averages drop.
I set out at just after 8am with an overcast skies and a slight chance of rain, although small Mistley does have a dark place in history as it was once the home of the notorious (and self appointed) Witchfinder General, Matthew Hopkins, who during the 17th century owned the Thorn Hotel where in the basement he extracted "confessions" from women accused of witchcraft, usually using torture methods to do so, thankfully his reign of terror was short lived and in an ironic twist (at least in one story) Hopkins himself was accused, tried and executed as a witch, 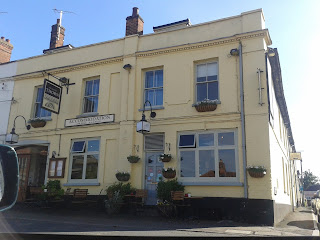 a little further down the road are the Adams towers, these were once the towers to the parish church and are all that remains, the centre section was demolished in the 19th century when the church on new road was built.

within a few metres of the Adams towers the road known as The Walls begins, the route follows this road all the way along into Manningtree and has some good views over the estuary.

Manningtree is England`s smallest Parish and yet it has a lot packed into the area along with a high street that, with one notable exception, is without the usual chain shops that would normally be found along it. the Essex Way follows the back streets of the town gradually rising until it meets with Coxs hill just outside the town. it was on this road where I had an unusual encounter, a dog was running up and down causing the traffic all sorts of problems, assuming the dog belonged to me one of the drivers wound down his window and proceeded to address me about the dog with the words "I say, would you mind awfully putting your dog on a lead?"...or words to that affect, to which I replied "I do beg your pardon sir, but you seem to be mistaken about the owenership of this dog and I suggest you direct you comments elsewhere"...or words to that effect, ( I did eventually come across the dogs owner later) after this the walk drops down into Dedham Vale and makes its way into Dedham itself.

once again the Essex way makes its way towards the River Stour and the furthest North that the route goes, if it did further North it would end up in Suffolk, the route follows the river for a couple of Kilometres and got me thinking, maybe it would be nice to canoe down it one day...

River Stour (the opposite bank is Suffolk)

after a few more kilometres of following the path I reached the village of Boxted, where I found an unusual addition to the Essex countryside, an Australian gum tree, which I considered a little odd but not as odd as something I would find later on with my walk.

between Boxted and Colchester is fairly open and easy ground to walk through it was while walking through some of this ground that I came across the possibly the oddest thing of the walk, a vineyard, someone is seriously trying to grow grapes in Essex!

the route after this follows minor roads and tracks to Great Horkesley, after nearly 25 kilometres both my knee and hip had started hurting, fortunately West Bergholt was just two kilometres away along some easy paths and gently rolling hills, unfortunately because of the pain I was in my pace had dropped drastically and just to add insult to injury "runchecker" pinged on to tell me that as well, so rather than being 25 minutes away it took nearly 45 minutes to walk the final 2 km.
this walk had taken its tole on me in the end but I would still recommend the Essex Way as a good introductory to long distance walking.

﻿Follow the link below to go to the Lone Wolf Mobile Bushcraft website.
﻿www.lwbcfs.com
﻿
﻿
﻿
Posted by Lone Wolf at 13:59