Last week I noticed that the soles of my shoes had worn away quite alarmingly on the outside edge of the heel and whilst this normally wouldn`t be a problem and is the way that most shoes should wear (outside heel to big toe) it shouldn`t have worn so quickly in shoes less than a year old, I figured that this must be happening due to the amount I wear the shoes, combined with a collapsed arch and heavy gait. 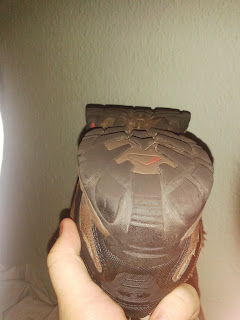 Although I`ve known for a while that I needed some sort of support underfoot (especially after the last major walk I did where I ended up with a very sore knee and hip)  I decided it was time to finally get some of these insoles.
The Superfeet insoles have been around for a number of years and have had some remarkable success stories, including one gentleman who walked from the Falkland Islands back to the UK using them in his boots so surely they would work for me. Having already worked with Superfeet insoles in one of my previous jobs in an outdoor retailers I was familiar with their products already and knew the insole I would require, the blue ones for approach style shoes, (I would also be using them in my mid boots as well) they do come in a variety of colours, blue, green, orange and pink, but this is NOT for looks, each colour means a different thing, usually the style of footwear they are designed to fit and the amount of support they give, there are also black versions but these are custom fitted to indivdual feet.
As these insoles are designed to fit to your heel as apposed to the shoe they need to be fitted properly, ideally cupping the heel and preventing the fat pad under it from thinning out, as such these insoles ideally need to be bought from a shop rather than online as an adviser not only needs to fit them to your foot but also grind the edges to an angle to fit in the bottom of the footwear. 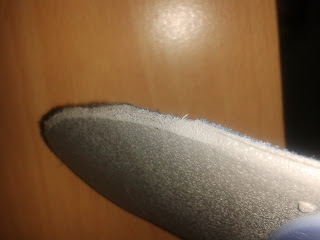 Superfeet slowly realign the feet into a neutral position (despite not technically or legally being a corrective insole) meaning greater comfort and easier walking over longer distances and possibly helping with joint problems, they do need breaking in though same as a pair of boots and this unfortunately does mean some pain and discomfort for the first couple of weeks and for that reason it isn`t recommended to wear the insoles for more than about two hours each day for the first week, everyone experiences a different type of pain but the most common is the feeling of a pebble under the arch, other experiences include some joint discomfort or pinching under the heel, personally I only experienced the pebble feeling, so this has probably begged the questions, do they work? and are they worth it?
The answer to the first question is yes they do, since I`ve been using them my stride has changed, my pace has quickened and the pain I experienced in my hip has gone so yes I think they do work but I`ll leave that decision up to you. Are they worth it? again that decision I`ll leave up to you but I think for £35 a pair they represent superb value for money because of the amount of time they would be used for and even if they help out only a small amount wouldn`t it be worth at least trying? best of all if they really don`t help Superfeet do offer a money back guarantee.
I do kick myself for not getting a pair of Superfeet sooner and I really would recommend at least trying them for a little while.

As with all outdoor equipment personal preference is key to any decision you make.﻿