With my new equipment bought and packed and my birthday celebrations out of the way my full attention now turned to to the week I had planned, I had already planned to set off at 5.30 on Monday morning and expected the journey to take between 10 and 12 hours with breaks but as the saying goes "the best laid plans of mice and men" and for some reason that I still cant figure out it took me 11 hours to just get to the border with Scotland, needless to say at this point I was extremely tired, something that became obvious when I nearly ran into the back of truck while using cruise control. an unplanned overnight stop resulted in a surprising result in the campsite at Hoddom Castle just outside Ecclefechan and my first encounter with micro bothy, these self contained huts provide a variety of things and come in 2 and 4 births, unfortunately I didn`t have enough cash on me to stay in one of these and so pitched my tent for the night. 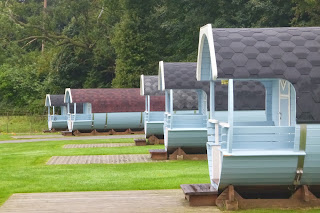 The next morning I set off and headed further north, once north of Glasgow I started driving along one of the most amazing roads in Britain, the A82, this road winds its way past Loch Lomand and up into the Highlands, my destination was Kinlochleven and I reached it mid afternoon this is where I was going to be camping for the next few nights and is handily situated behind the ice climbing wall. This campsite also had micro bothy`s but they were all booked 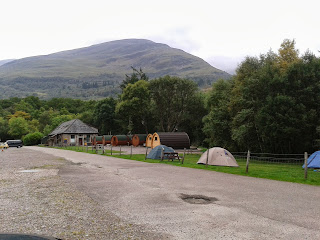 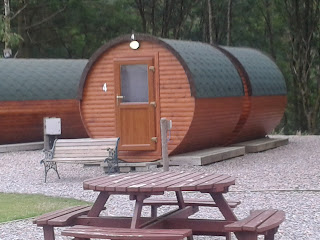 Once I`d set my tent up I went for a quick pint at the local pub and went for a short walk around the village, I had planned on a walk up to a reservoir but with the light fading I decided against this, there was afterall another day...after my ice climbing session.
Wednesday was when I had booked my ice climbing session and as it started at 10.30 I had time for a late breakfast.
As I didn`t want to waste any time when I got to the wall I had already dressed appropriately and had been given some strange looks on the way in after filling in the usual paperwork I made my way to the ice wall where I met the person I would be climbing with, after brief introductions the instructor came to meet us and it was time for me to become a student once again. 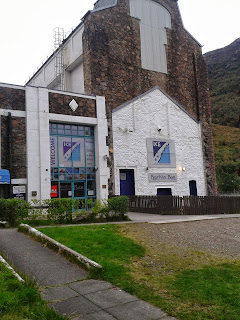 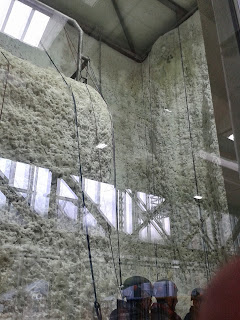 As I expected the majority of the lesson consisted of getting confident on the crampons and correct use of the ice axes, compared to rock climbing there is a lot more to remember such as keeping your feet at 90 degrees to the ice face so that both front points of the crampons are driven into the ice, having your feet wide apart when resting and only bringing them together when moving up, looking for ledges to put feet on, learning that massive swing aren`t always necessary when using axes and just as in rock climbing you need to push through your legs rather than pulling on your arms, hard when you`re conscience of the 2 tools in your hands, I did fall off a couple of times I will admit but this was to be expected seeing that I had only been ice climbing once before back in the early 2000s.
I did find a couple of things surprising during the session, the first being how difficult belaying is, because of the cold in the room the ropes had frozen (obviously) and I was surprised at the amount of effort required to pass the rope through the belay devise and one point the person I was climbing with took a break and weighted the rope, climbing ropes are designed to stretch slightly to absorb impact but even with the rope locked off it stretched at least 18 inches.
Something else I found surprising was how hot I got at one point I had to take my glove off and within seconds my hand was steaming, I would have liked to have left my gloves off but knew better than to do this, which had a further impact on my belaying, as most people will testify to belaying with gloves is more difficult as you cant feel the rope and cant feel what its doing and you subconsciously find yourself gripping the rope until muscles start hurting. 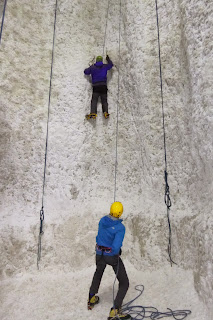 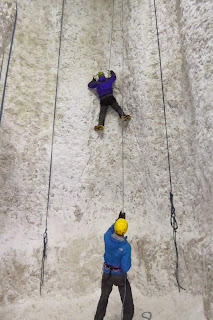 2 and half hours went by very quickly and before I knew it time was up, after a short lunch it was time to decide what to do with my afternoon, I had planned on a couple of small walks, one along part of the West Highland way as it did conveniently run past the bottom of the campsite and one to a local waterfall called grey mares tail, I decided on walking to the grey mare tail waterfall which with a slow walk didn`t take too long to reach, by the time I got back to the campsite once again the light was starting to fade.
Morning dawned on my last day in Scotland and I spent the early part of the morning packing up my equipment but I was detirmined to go for one last walk even if it was only a couple of hours along the West Highland Way, this well trodden and well maintained footpath runs from Glasgow to Fort William and takes in part of the spectacular Loch Lomand National park, obviously I wasn`t going to be able to do all of it as I had to have left the campsite by 12 noon, but I figure if I started at 9 in the morning and walked south for an hour and then turned around I would at least get a feel for the path and I was right all too soon 10 am came around and I found myself struggling to turn round and head back but I had to, I reached the car just after 11 and pulled my new boots off put my trainers on and said goodbye to the campsite, the run back home seemed to take no time at all and even with a diversion through the Lake District and Penrith I still found myself near York by 7pm, as I still had the rest of Friday to get home I decided as one last splurge on my holiday to treat myself to a motel bed and a trip into York city centre, which it has to be said is one of my favourite cities.

so that was my week in Scotland, there will be one more short blog next week on using the zepheros tent in Scotland but that will be the last of them, Ice climbing was definitely a highlight as was some of the views from the area, I dont how long it will be before I can get back to Scotland but I hope its not too long