As I said at the end of the last blog I have spent the week in Scotland where I did a little bit of walking and had a taster session of ice climbing, but more on this at a later date. I mentioned in a previous blog the need for good boots and as the boot I had have started giving me blisters (see Mersea walk blog) I needed to get some new ones, having had my feet properly measured, which I thoroughly recommend (not just length but width and a couple of other measurements too) I knew that I had `C` width feet, which is quite narrow and that I had a problem with my right foot which is why I use superfeet, so I needed to buy a boot that was narrow but would also take the superfeet insole comfortably and I knew just the boot that would fit the bill, the Asolo Flames(r), I`ve known about these boots for quite some time and have wanted a pair since I first tried them on many years ago but since the boots I had were still serving me well I didn`t really have any excuse to get a new pair, until Mersea.
Being an Italian brand it comes as no surprise that Asolo(r) are on the narrow side when it comes to boot making, this does mean for me that the boots are a much better fit and more comfortable straight away, the one thing I did have a little trouble with was the top sets of eyelets digging into my ankle but after a few hours this soon disappeared, the only other issue I have encountered so far is one that we all encounter when going from old boots to new and that is the relative rigidity around the foot. 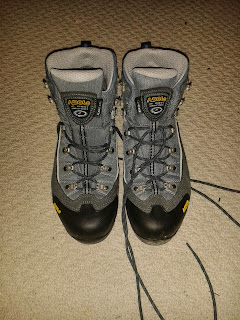 The sole unit of the boot uses a matrix rubber compound but does incorporate something called the "Asobrake"(r) which is essentially a big rubber lug protruding from the back of the arch support whether this works remains to be seen, the sole unit itself is reasonably rigid and fairly thick meaning these boots should give a long service life. 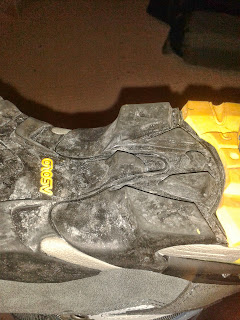 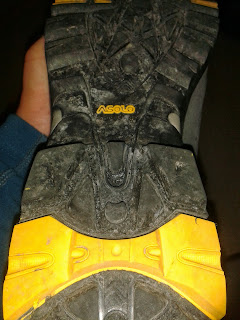 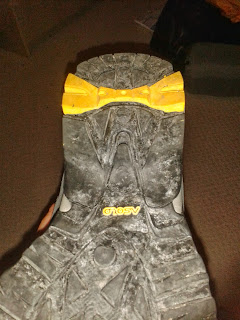 Being made of fabric these boots are not naturally waterproof (not always a bad thing) and so have a Gore-Tex(r) lining which should cope with any amount of water thrown at it...until I step in something deeper than the boot.
The other thing that really makes these boots stand out for me is the locking eyelet, these have started being incorporated on a lot of boots but the ones on the Flames are the only ones I have so far found that actually hold the lace in the same place for the whole day, this means that the boots can be tied tight around the foot have the laces locked in that position and have a little more flex around the ankle if needed. I`m hoping these new boots will last longer than the last boot I bought and seeing they lasted five years these new boots do have strong competition. (I still have my old boots as there is still some wear left in them and as I mentioned I do have hoarding tendencies)

The other piece of equipment I bought although not as vital as a new pair of boots was still dictated by the end of life of another piece of equipment and that was a new sleeping mat, a few weeks ago I went to a festival and took my old self inflating mat, this mat has served me well in the past and I thought it would continue to do so but unfortunately that wasn`t to be, due to what I assume to be the valve leaking, air was slowly forced out under pressure during the night and I ended up with the worst dead leg from laying on my side all night and not being able to work my leg properly for about 15 minutes after waking up, I`m sure there`s a medical term for this but I don`t know it, I ditched the mat at the end of the festival and started looking for its replacement, it came in the form of the Multi mat(r) Superlite air, this has got to be one of the most remarkable pieces of equipment I have come across, the Superlite Air is a full length airbed that weighs just 300 grams and packs down to the size of about 2 tin cans. 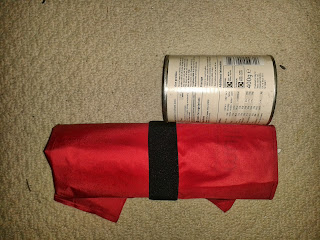 when fully inflated the 6 cells  give approximately 6 cm of lift, the material used in the construction of the airbed at first feels very light and flimsy but no matter how much I wriggled about and changed position the Superlite air showed no sign of bursting or even deflating, of course with trapped air being a good insulator underneath me combined with a three season sleeping bag and a one person tent led to me becoming too hot during the nights, as with virtually everything in the outdoors there are downsides to equipment and the superlite air does not escape this, the amount of lift created by the airbed meant that no matter how much I adjusted the inner tent my head was still touching it, this was however a minor inconvenience, the biggest disadvantages to the superlite air is the narrowness of the design. 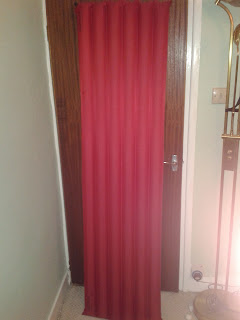 When lying on my back my arms were off the sides of the bed which for myself wouldn`t be too much of problem as I sleep on my side but for those people that sleep on their backs this may become too much to bear, the other problem with the Superlite air is psychological, I found the first night I used it I was constantly worried about the thing bursting but as I mentioned above this didn`t happen even with 92kg on it (not sure what that is in pounds) obviously this didn`t help with getting a good nights sleep.

This new equipment will obviously take a little bit of getting use to but should last a fair amount of time before needing replacement.
www.lwbcfs.com