A few weeks ago I decided to take a short break and go to a country  hadn`t been to, (to be honest this is one of my goals this year, to visit at least three countries I haven`t been to) and with the ever reliable Groupon discount voucher scheme I decided to fulfil to bucket list entries, see the northern lights and visit Iceland, I chose the 3 nights package and promptly filled everything out that I needed to, with everything sorted I now just had to wait for the date of departure, well actually the day before the date of departure.
As I was flying from Luton airport very early in the morning I had made the decision to go the night before as most people would, what I found slightly amusing was it took longer to get from where I live to Luton than it did flying to Iceland, Colchester to Stratford by train, Stratford to West Hampsted via London Overground, train to Luton airport.
I had my first big shock of the trip when I arrived at the hotel I had booked for the evening, to say it was overpriced was putting it mildly, £120 for one night in a box room!
after a pleasant two and half hour flight to Iceland the adventure could really begin, the bus ride in Reykjavik provided the first of many many spectacular sights, the mountains beyond the city at once calling me to walk in and explore them. 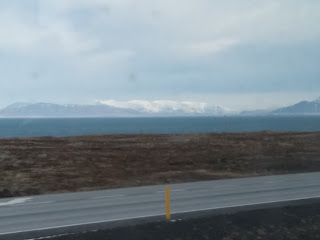 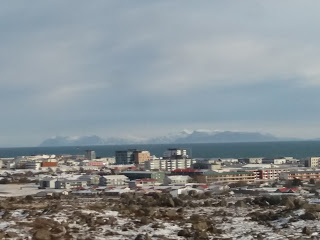 My hotel was located just outside the city centre, reception was open 24 hours a day and although I had to wait for my room to be ready having arrived at the hotel early the reception was a pleasant place to spend an hour or so with plenty of books to read and leaflets to browse to make plans for the next few days, although a couple of things had been planned at the time of buying the package deal I had been left with a couple of days where I had to plan my own excursions, with so much to choose from I had to narrow it down for budget and time reasons, I eventually chose the Golden circle tour, with this tour there are two versions, the Golden circle and the golden circle direct, out of the two I went for the direct tour, this tour is shorter and misses out one of the usual stops but you still get the essence of the Icelandic wilderness, our tour guide was fantastic at pointing out places and points of interest as we went along, as most of you will probably know the vast majority of Iceland`s electricity comes from geothermal technology (a technology I`m hugely in favour of, its just a shame that Iceland is only one of a few countries that can exploit it effectively) however the Icelanders also use the the hot water to directly heat their homes making it doubly effective, the golden circle tour takes in several waterfalls as well as a well known geyser, please don`t ask me to pronounce the names of the waterfalls because I really couldn`t do it, although there are some interesting stories surrounding them 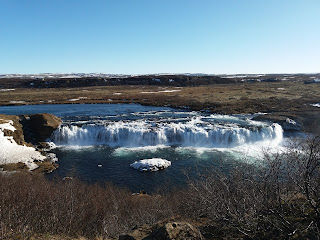 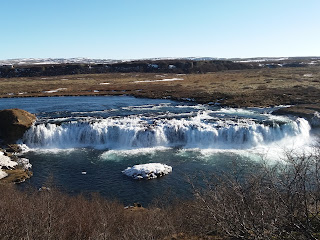 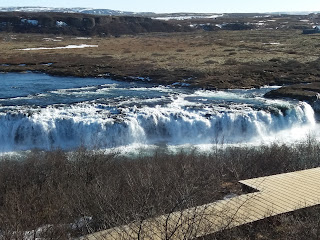 the next stop on the tour was the geyser, interestingly the geyser that people might associate with Iceland is longer the case, a few years ago an earthquake in the area changed the geology of the area and changed the active geyser. 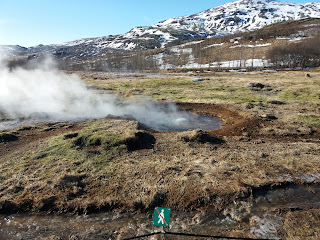 it was unfortunately while at the geyser site that I encountered my first "problem" I was trying to film the geyser erupting but kept getting interrupted by other tourists particularly of a certain nation which I wont mention here, either pushing me out of the way for their own selfish behavior or standing directly in front of me blocking my view. it took me at least a dozen times to get the resulting video. 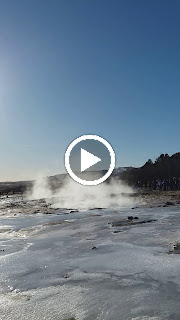 opposite the geyser is a visitors centre selling all the usual stuff, at this I decided it was time for lunch, although I don`t eat red meat I had been persuaded to try the lamb and I have to admit, it was one of the sweetest succulent pieces of meat I had had in along time and was well worth the price which ironically cost more than the Irish coffee I had with it, after lunch it was back on the bus to the next waterfall, this was where the conservation movement in Iceland really took off, without going into too much detail it involved a young girl, her father and an electricity company, geologically the waterfall is interesting as the waterfall and the gorge it flows through was formed at the same time during an earthquake and in one movement. 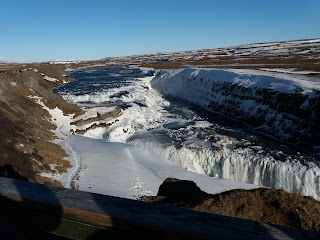 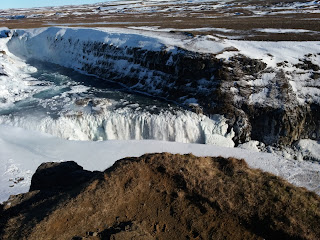 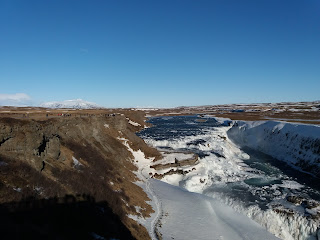 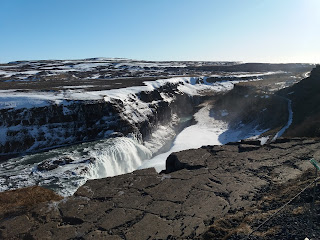 from one spectacular site to another, in this case the geographical fault line between the Eurasian tectonic plate and the North American Tectonic plate, many people think that this gap is only a few feet across but actually its a couple of miles wide, 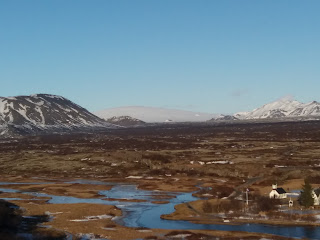 the hills on the left of this picture are on the North American plate and the hills on the right are on the Eurasian plate, the white building in the bottom right of the picture is the approximate position of where the worlds oldest parliament took place (from 900ish AD) before it moved into Reykjavik, 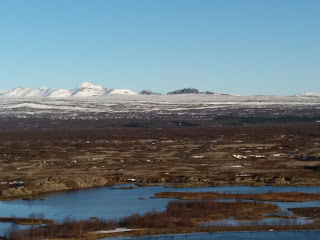 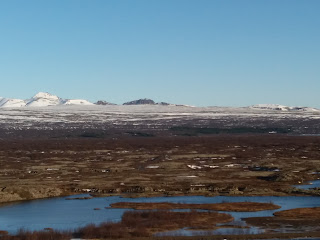 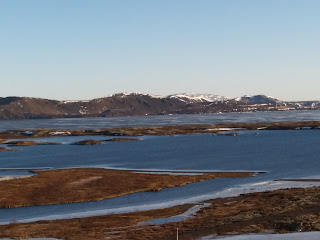 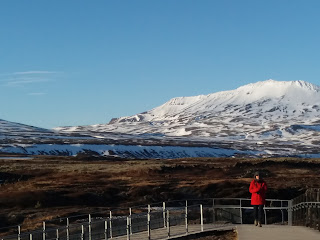 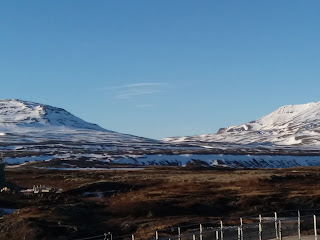 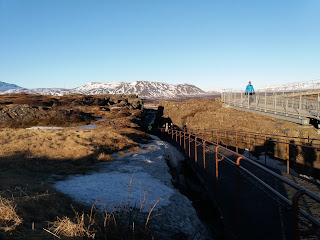 I haven`t seen the show but I`m also told that this is where part of Game of Thrones was filmed. 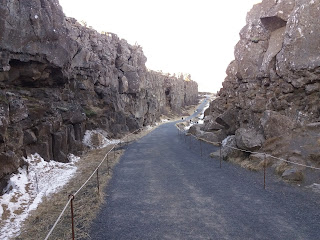 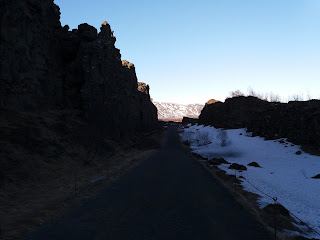 with the golden circle tour done and the relativity close sights taken in it was time to return to the hotel and plan for the next day.
the next day had already been planned for me by the people I booked the trip with, this was a trip to the famous blue lagoon, the natural geothermal hot springs on the outskirts of the city, stunning is one way to describe this attraction and rightly so, another word is expensive, something I will mention later on, unfortunately slightly too expensive for me, although I did have a drink and watched other people enjoying themselves in the lagoon. 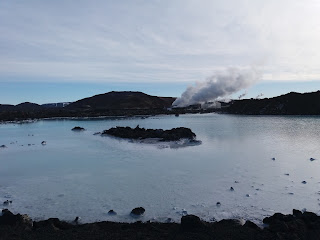 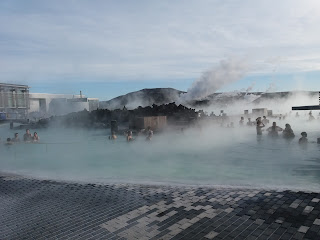 after a couple of hours at the lagoon I returned to the hotel and prepared myself for the afternoon activity which in this case was a self guided tour of the city, there are numerous maps taking in different parts of the city, 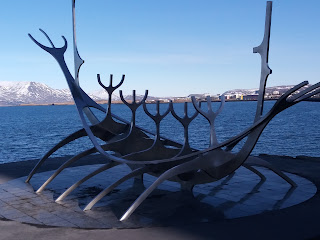 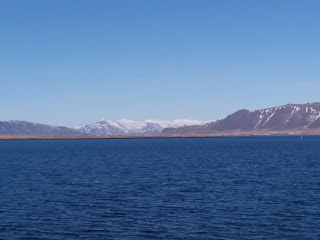 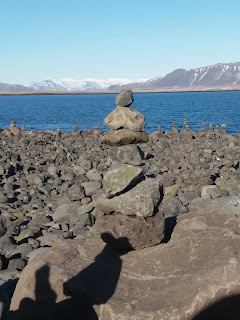 the tour took in some of the more interesting sights including a couple of museums and the artworks in the pictures above, i did have to cut the tour short however and head back to the hotel to prepare for that nights excursion.

So of course the main reason for visiting Iceland was to see the northern lights, this was also part of the package that I had bought, I will state right now that I didn`t get any pictures of the lights themselves as I didn`t have the right equipment (a camera with a slow shutter speed), I was staying in Iceland for three nights and tried every night to see the lights, every time we ended up going to the same place to see if we could see them, and every night I encountered the same issue I had with the geyser, other tourists, in what was supposed to be a setting of awe and natural spectacle I found myself surrounded by people ignorant of where they were, selfish towards others (letting camera flashes go off when asked not to, shouting to each other, pushing people out of the way and being loud) this really did spoil the whole atmosphere for me, so did I see the lights? yes on the third and final night I was rewarded with the spectacle of the lights and for a brief moment everyone there was quiet and enjoyed the same sights I was witnessing.....until a massive whoop was shouted and everyone went back to their ignorant selfish ways, being late in the season (March) the lights weren`t as bright or distinct as you see in pictures but the ribbon of greens and reds dancing across the sky made me more than happy and crossed another thing off my list.

the only thing left to do was enjoy my last night in the hotel before heading back to the airport and heading home.

this trip was made possible through Groupon, the deal I selected cost £379 and included a three night stay in a selected hotel with breakfast, the northern lights tour and blue lagoon, flights were with Easy Jet flying out of Luton airport.

Is Iceland as expensive as people say it is?
I found the prices fairly reasonable for a Scandinavian country but you have to remember I was travelling alone, I can see however that for more than one person Iceland does get very expensive, a basic meal by myself cost the equivalent of £15 of course double this for two people and so on, alcohol is expensive as you would expect, a small bottle of beer was the about £6.50, if you are planning a trip to Iceland take all of this into account.