Yes it’s another vs. blog; I know I did one last week on the Hilleberg vs. Wild Country tents but thanks to another act of temporary insanity (and some money I’ve been owed for a couple of months!) I’ve ended up with a new sleeping bag but what was wrong with the old one, short answer nothing it was fine, long answer it was too big, too bulky, too heavy, damaged and had missing parts (I’ll explain later) but it was warm. However The new sleeping bag is considerably smaller and lighter as the pictures below show.


I bought the Nanok about 11 years ago whilst I was at university in the Lake District and was the best bag I could afford at the time and had some novel features including being longer than a standard length sleeping bag, 195 cm as opposed to 180 cm, not that I’m overly tall, zips on both sides rather than just the one side and a removable waterproof bag for boots at the bottom, these features come from the fact that these bag are based on a Norwegian military design, however this didn’t make it totally immune to being damaged as I had lost the waterproof bag and broke the elastic to the shoulder baffle. Good as this bag it has now got the point where replacement is inevitable, much like most equipment which is why I ended up buying the Mountain Hardwear Lamina 20 a sleeping bag I have coveted for some years now.


Firstly a little background on why I rate Mountain Hardwear so highly, several years ago whilst I was at university, my now ex-girlfriend and I went on an expedition along part of the Pennine Bridleway and the tent we were using was an older Mountain Hardwear which thanks to some drunk people ended up being broken. Without shelter for the next few nights it looked like we would have to abandon the expedition however a call to Mountain Hardwear to see if they would be able to fix the tent yielded surprising results, not only would they be able to fix the tent but they also asked for our next campsite address, when we arrived there was a new tent waiting for us along with a letter essentially saying, use this tent for the rest of your expedition, send both back and we`ll repair your one free of charge, I’ve never known customer service like it before or since and as such have become a loyal Mountain Hardwear customer.


As I mentioned above I have wanted the Mountain Hardwear Lamina 20 since I first saw it whilst working at Cotswold Outdoors several years ago, it cost a small fortune for a synthetic bag (£90) even then but was and still is worth every single penny, £135 (todays price) buys you what is, in my opinion at least, one of the best synthetic sleeping bags on the market, the first thing to note about this bag is being an American company the 20 in the name means 20® F which is about -7®C, a one sided zip (make sure it’s the correct side for you), shoulder and Face baffles that close fully, and an accessory pocket, the bag also comes with a storage bag for when the bag is not being used which is not that common for a synthetic bag (it is crucial that sleeping bags are not stored in their stuff sacks as this can deteriorate performance) and being 180 cm it feels about the right size when i`m inside, it feel instantly warmer when I got inside and did everything up, this was probably due to the baffles not being broken and that both the shoulders and face baffles can be closed down.


as you can see in the photos the Lamina is considerably smaller than the endurance yet it only loses 3 degrees in warmth this is due to the filling used, a more or less standard hollowfibre in the Nanok as opposed to the thermal Q ® used in the Lamina which is considerably smaller in size and weight to standard hollowfibre yet still retains warmth.


In terms of practicality the Nanok does win out over the Mountain Hardwear as it does have the dual zip the boot bag is 3® warmer and has the extra length, however it does lose out to the Lamina in terms of bulk, weight, and pack size. I`ll be keeping both bags for the time being as I do have slight hording tendencies and I’ll be using both until I can bear to part with the Nanok.

Nanok on the left, Lamina on the right﻿ 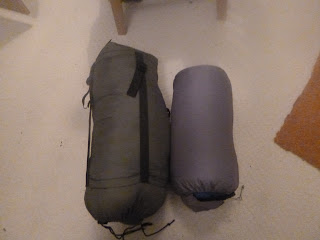 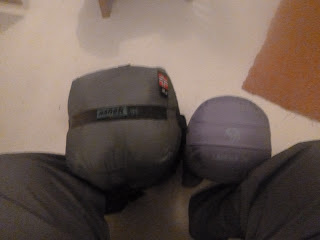 As with all outdoor equipment personal preference is key to any decision you make.

Follow the link below to go to the Lone Wolf Mobile Bushcraft website.
www.lwbcfs.com
Posted by Lone Wolf at 12:36